If you are considering a redundancy offer from British Airways, the infographic and FAQs below will help you to understand your options under APS and guide you on where to find information about your APS pension. 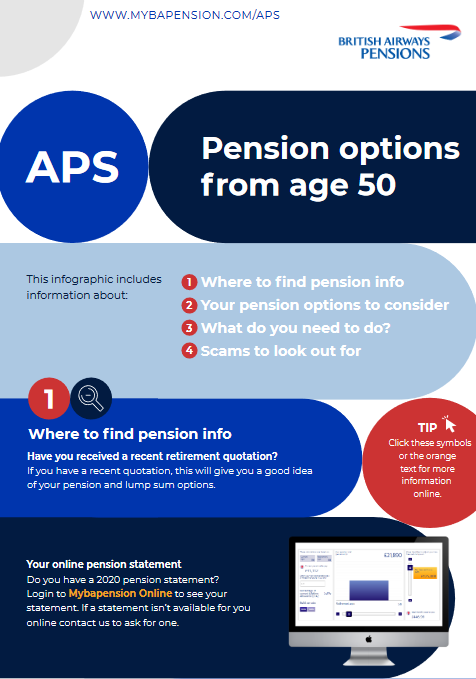 Where can I find up-to-date information about my APS Pension?

If you are an active member of APS under your normal retirement age (NRA), we provided your latest online yearly statement, as at 1 April 2020, at the beginning of June 2020. Simply login to Mybapension online to view your latest statement.

Your statement shows the latest value of your pension and, if you are under age 55, how much pension you will be able to draw from age 55.

If you have a NAPS AVC fund, you can view your latest available AVC fund balances by clicking on the ‘Smart Additional Voluntary Contributions (SmartAVCs)’ link under ‘Your e-Forms’.

Close
Can I pay a redundancy payment into APS? Would this also apply to a payment in lieu of notice (‘PILON’)?

Yes, you can. However, the entire cost of providing any extra pension must be met by your payment. The cost of £100 a year of pension is currently between £5,000 and £8,000 depending on your age at retirement and there is no spouse pension attached to the additional pension secured. Please contact us if you would like more details about this option.

Close
Can I pay a redundancy payment into my APS AVCs?

You will be able to pay a redundancy payment into your APS, BAPP or SIPP pension but you cannot pay it into an APS AVC account.

Close
If I am still working at BA:

Can I take my pension?

You can take your APS benefits at any time from age 50 if you wish.

If you draw your pension earlier than your normal retirement age (NRA), your pension payments will be reduced to allow for the longer payment period.

Can I draw my AVCs only first?

There is no option under APS to take a tax-free lump sum or draw only your AVCs separately from your APS pension. However, you can transfer some or all of your APS AVCs independently of your APS deferred pension to another approved pension arrangement.

Close
Where can I go if I want to receive financial advice?

We have detailed information about finding regulated retirement advice on the ‘Financial advice’ page of this website, including where to find an adviser and a useful guide from the Financial Conduct Authority on ‘What to ask an adviser’. The ‘Financial advice’ page also includes details of our Pension Advice Allowance option, which allows you to use up to £500 of your APS AVCs towards regulated retirement advice.

Close
If I am an active member of APS, what happens to my pension if I leave BA?

If you leave BA and you are over age 50, you can choose to draw your APS pension straight away, or you can leave it in the scheme and draw it later. If you decide to draw it later, you will be entitled to a deferred pension which is due to be paid from your normal retirement age (NRA) under the rules of your Scheme. Your deferred pension will receive yearly increases in line with the Scheme rules between your date of leaving and the date you draw it.

We will send full details of your pension benefits and options automatically to your home address after you leave. If you have any further queries about your pension, please contact us.

Close
When can I draw my APS pension if I leave BA on redundancy?

If you are over age 50, you can usually draw your pension immediately subject to the APS Scheme rules. If you are an active member of APS and under your Normal Retirement Age (NRA) and you have registered to manage your pension online, you can use our pension modeller to model your pension and lump sum options at different retirement ages.

If you have any queries about your pension, please contact us.

Close
I might need to draw my pension; how do I get a retirement quote?

If you are considering retiring within the next four months, please contact us to request a quotation. Please bear in mind that our response times are likely to be longer than usual during the Coronavirus outbreak. If you are under your normal retirement age (NRA) and you have registered to manage your pension online, you can use our pension modeller to model your pension and lump sum options at different retirement ages.

Close
What happens if I leave BA without drawing my APS pension?

When you are approaching your NRA, we will write to you with full details of your APS pension benefits and options about four months beforehand.

You can contact us to ask for a retirement quotation at any time. Please allow at least four months between the date of your request and the date you wish to draw your APS pension.

Close
Does the scheme offer flexible retirement so that I can draw only part of my APS Pension?

Yes. The Scheme includes a flexible retirement option but only while you are still employed by British Airways. The flexible retirement option gives you one opportunity at any time from age 55 to obtain BA's consent to permanently reduce your working hours and draw all or part of your pension benefits built up to that date whilst continuing to build up further pension for future service. Your remaining benefits must then be drawn at final retirement.

Close
Can I transfer my whole APS Pension to another pension arrangement?

A pension transfer from a defined benefit (DB) pension scheme such as APS means giving up your benefits in the Scheme (and any dependants’ benefits you have paid towards) in return for a cash value which is invested in another pension scheme of your choice. At any time before you start to draw your pension, you can ask us to transfer the value of your benefits to another registered pension arrangement. This value of your benefits is called a ‘cash equivalent transfer value’ or CETV. We usually include an up-to-date assessment of your CETV in your retirement pack. You will have to show that you have taken financial advice from an FCA-regulated financial adviser if the amount of your APS CETV is £30,000 or more.

Close
Can I transfer only part of my APS pension to another pension arrangement?

You can take a partial transfer out of your APS pension and leave the rest within the Scheme if you have a deferred pension entitlement which was built up both before and after April 1997.

APS pensions are generally made up of two main portions, built up over the following periods:

An APS member who has a deferred pension entitlement, which was built up during both of these periods has one opportunity to make a partial transfer out in respect of the pension earned before April 1997 before drawing or transferring out their remaining Scheme benefits (earned after April 1997) at a later date.

* In all cases, any pension earned before April 1997 must be transferred out.

You will have to show that you have taken financial advice from an FCA-regulated financial adviser if the amount of your APS CETV is £30,000 or more.

Visit our Partial transfers page for more information about this option.

Close
How can I get a cash equivalent transfer value (CETV) of my APS pension?

If you will be over age 50 when you leave BA, we will automatically send you a retirement pack as soon as we are notified of your leaving date by BA. Your retirement pack will include a guaranteed CETV.

If you will be under age 50, please use the online ‘Contact us’ form to request a CETV quotation. Due to the ongoing COVID-19 situation our workload is higher than usual, and we are producing CETV quotations in chronological order. Our response time for these is currently eight weeks.