The Lifetime Allowance (LTA) is £1,073,100 from April 2020. If the value of your pension benefits from all UK-registered pension schemes exceeds the LTA at the point you draw them, you will incur a tax charge on the amount over the LTA in force at that date.

Protections are available and further information is available at www.hmrc.gov.uk/pensionschemes/pension-savings-la.htm

Working out the value of your BA pension - deferred members 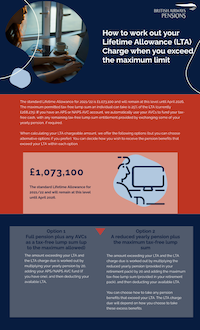 You can find more information about protection from LTA charges on the HMRC website: www.hmrc.gov.uk/pensionschemes/pension-savings-la.htm

Members with high value benefits at 5 April 2006 were able to register with HMRC (up until April 2009) for protection against this charge, known as 'Primary protection' and 'Enhanced protection'.

When the government reduced the LTA from £1.8 million to £1.5 million from 6 April 2012, members whose pension value exceeded £1.5 million had a second opportunity to apply for protection, known as ‘Fixed Protection 2012’ (FP12), up until 5 April 2012. FP12 maintained a personal LTA of £1.8 million after 6 April 2012, provided the member did not save AVCs or build up any further pension benefits.

HMRC did not set a deadline for applications for FP16 or IP16. Instead, if you wish to rely on IP16 or FP16 you should apply for this protection using HMRC’s online application service, before drawing your benefits. HMRC will issue a reference number which you will need to provide to the Pension Scheme when drawing your pension benefits.

Please note that if you have registered for FP12, FP14 or and you are still employed by BA, you need to be aware that you may be automatically enrolled into the British Airways Pension Plan (BAPP) under government rules. British Airways’ auto-enrolment date occurs every three years starting 1 January 2013.